Why is sleep so important for our health?

8 hours is widely considered to be the optimal amount of sleep a grown adult needs each night, but in reality everyone’s individual sleep requirements differ. Some people cope better with less sleep than others, while others need more sleep in order to complete basic day-to-day tasks. It’s been reported that Brits only get an average of 4 hours and 50 minutes of uninterrupted sleep every night. While this might be fine for some people, not getting enough sleep has a detrimental effect on our mental and physical health, as well as how well we perform everyday tasks.

What are the health benefits of sleep?

When we sleep at night, our bodies go into a state of repair through the production of Human Growth Hormone (HGH). This promotes the recovery and re-energising of muscles and is also associated with muscle memory. The health benefits associated with getting a good night’s sleep range from improved brain function to a boost in the immune system.

One study that focused on the effects of sleep deprivation found that a lack of sleep had a negative effect on memory. There are two regions within the brain that are responsible for memory: the hippocampus and the neocortex. The hippocampus is responsible for learning new skills and information (short-term memory) and as we sleep, these memories can be established in the neocortex, which handles our long-term memory. The study, which is published in Science Advances, found that these traces are stable if a sleeping phase follows the learning phase. If not, our brains rely on the hippocampus for memories.

A restful REM (rapid eye movement—the stage of sleep where we experience dreams) sleep is crucial for resting the siren of our brains, which is the nucleus of brain cells that are located deep within the brain. While this siren is ‘on’ during the day, it needs to be switched ‘off’ in order for it to function without any issues, which is what happens during sleep. Without getting enough sleep, our brains can find it difficult to correctly assess any problems and make the right decisions.

A study published by the National Institute of Health found that people who had more variations in their bedtimes and the hours they slept were more likely to suffer from metabolic problems. This link between irregular sleep and metabolic dysfunction means that sufferers were more likely to experience lower HDL cholesterol, higher blood pressure, and higher waist circumference. Lack of sleep also changes the way we metabolise fat. Researchers found that sleep restriction leads to faster clearance of lipids (fatty acids that are insoluble in water) following a meal, which then causes weight gain as the lipids are stored instead of evaporating.

Not getting enough sleep also throws off the levels of the hormones leptin and ghrelin in the brain, which are responsible for appetite control. Leptin is produced by fat cells and tells our brains to decrease our appetite, while ghrelin is responsible for telling the body we’re hungry. When we haven’t had enough sleep, our bodies start producing more ghrelin and not enough leptin, leading to overeating and weight gain.

As we’ve already mentioned, HGH is released as we sleep. This boosts recovery within our muscles and central nervous system, which is responsible for the contracting and relaxing of muscles, the response to pain, and reaction times. HGH is also responsible for building and repairing muscle tissue. The National Sleep Foundation has also found that athletes could improve their performance with up to 10 hours of sleep per night, rather than the average of 8 hours. It also reported that basketball players boost their speed by 5% with an extra 2 hours of sleep, while those who get around 9 hours can drastically improve performance during high-intensity workouts (like weight lifting, biking, and running).

A study by the American Heart Association revealed that there is a higher chance of cardiovascular problems among those who don’t have a regular sleeping pattern. While we sleep, our blood pressure drops, giving our heart and blood vessels a rest from pumping enough blood to keep us active during the day. The less sleep we get, the longer our blood pressure is up during a 24-hour cycle. Having constantly high blood pressure increases our chances of suffering from heart disease and stroke.

The effect that lack of rest has on our immune systems has been found to be similar to drinking too much alcohol. It’s also been reported that having less than seven hours sleep for three consecutive nights has the same effect on the body as missing an entire night of sleep, while having less than five hours sleep per night is associated with higher mortality rates. Researchers have found that getting a good night’s sleep can boost the effectiveness of T cells found within our bodies, which is linked to our immune systems. T cells recognise pathogens, which are harmful foreign bodies, and attach and destroy them to stop you getting sick. The research found that getting the right amount of sleep allows T cells to function correctly, keeping us healthier for longer.

There is a strong link between bad sleeping patterns and poor mental health. Professionals have found that those with mental health problems are more likely to suffer from a sleep disorder. According to Harvard Medical School, chronic sleep problems typically affect over 50% of patients in psychiatric care. This is in stark contrast to the general population, where less than 20% of adults reportedly suffer from sleep problems. Getting enough good quality sleep is crucial to keeping your brain running at its optimal level, including producing the right levels of hormones needed to stay healthy.

How much sleep do I need?

How much sleep each person needs is solely dependent on the individual. Sleep requirements also change as we age. According to the National Sleep Foundation, the average amount of sleep each age group needs are:

It is important to stick to having a similar bedtime and waking time each day, as it allows our bodies to get into a routine. This routine is known as a circadian rhythm. Our circadian rhythm climbs in the morning as we wake, giving us the energy we need for the day ahead. A lack of sleep disrupts this, which is what leaves us feeling groggy and tired throughout the day. Normally, after being awake for about 15 hours, the circadian rhythm naturally drops to its lowest level, putting us to sleep. However, not getting enough sleep can make the rhythm drop sooner than this, making us sleepier even earlier.

How to get a good night’s sleep

Now we understand the importance of getting a good night’s sleep, we can talk about how to do it. While everyone’s bedtime routine is different, there are a few key things that help us drift off quickly.

Stick to your sleep schedule

This means getting up and going to bed at the same time every day, including the weekends. Having this level of consistency helps regulate the circadian rhythm, meaning our body clock will naturally go to sleep and wake up at roughly the same time each day.

Stay active during the day

Undertaking physical activity on a regular basis promotes sleep, as it tires the body out. This means it’s easier to fall asleep and stay in a deeper state of sleep for longer. Even something as simple as walking more can aid sleep. A 2019 study found that higher levels of both light and moderate physical activity provide better sleep quality.

The blue light in screens can actually suppress melatonin, which is a hormone that directly affects and regulates the sleep-wake cycle. Lacking in melatonin leads to insomnia which, therefore, affects how tired we feel during the day, as well as having a direct impact on our mental and physical health. Avoiding looking at phones, tablets, or the TV for about an hour before going to sleep can be hugely beneficial in getting a good night’s sleep.

All types of light can affect and disrupt sleep, so ensure doors are closed, curtains are drawn, eye masks are worn, and everything is done in order to keep the room as dark as possible. We also recommend keeping the noise to a minimum, making it easier to drift off with no distractions. Turning a fan or AC on can also help, with experts claiming that 65°F (18°C) is the optimal temperature to fall asleep in. Our bodies naturally drop in temperature as we get tired, so making it cooler in your room can help us naturally prepare to sleep.

There is such a thing as too much sleep. Oversleeping has been linked to a number of the same medical issues as undersleeping, such as diabetes, heart disease, stroke, and obesity, as well as an increased risk of early death. Those who frequently sleep excessively may suffer from hypersomnia, which will need to be diagnosed by a professional.

Taking a nap in the middle of the day doesn’t necessarily equate to a bad night’s sleep. Sometimes our bodies need a boost of relaxation, which we can get via a short nap. However, just like getting the right amount of sleep is dependent on an individual’s needs, napping isn’t for everyone. The longer our bodies are asleep, the higher the chances of falling into a deeper sleeping phase, which we want to avoid to stop ourselves from waking up feeling groggy. Keeping naps short and sweet—around 10-20 minutes—is ideal. The NHS has also reported that afternoon naps may well help lower the risk of heart attacks and strokes, as our blood pressure naturally drops during sleep.

For any sleeping problems—such as insomnia or hypersomnia—you may consider taking sleeping pills to help deal with sleeping issues on a daily basis. However, these can be addictive and so should be taken under the advice of a doctor or GP. Common side effects of an average sleeping pill include prolonged drowsiness (even during the next day), headaches, muscle aches, dry mouth, dizziness, unsteadiness, and a lack of focus. It’s also possible for our bodies to build a tolerance against these medications, which then leads to us requiring a stronger dose. 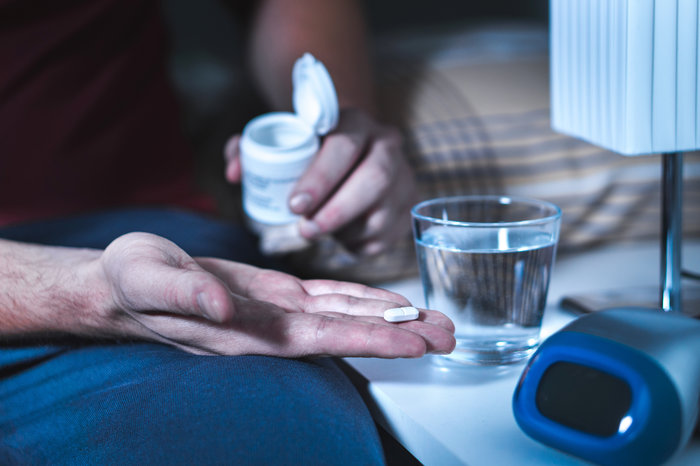 In some cases, there may be an underlying issue to sleep problems, such as stress, depression, or anxiety. Sleeping pills do not deal with these problems and instead act as a temporary solution. In these situations, speaking to a professional mental health expert is the best and healthiest way to help overcome any sleeping problems.